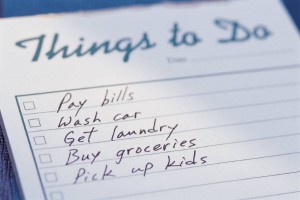 We all have ideas floating around our brains and tasks that we need to get to. For many of us, the way we keep track of them is by collecting these bits into lists – sometimes many, many lists. In recent years, there have been new productivity approaches that suggest creating lists for the various contexts of your life – work (with subdivisions), personal (with subdivisions), and so on. While this can be great for keeping your tasks organized, this approach may have some downsides:

Multiple lists can be confusing. When you have more than a couple lists to keep track of, it can be hard to remember what item was on which list. You may also spend time splitting hairs trying to decide which list is the very best fit for a particular item or task. Too many lists is similar to having too many files in your filing system – when you have lots of small divisions, sometimes it’s hard to decide where to place an item that really could live in either place. If you find yourself hemming and hawing over deciding which of two similar lists your task belongs to, try streamlining or combining any closely-related lists.

More lists often equals more stress. It’s hard to wrap your head around the entirety of what you have going on and the tasks you have to juggle when you have more than a few lists that your tasks are spread across. I’ve worked with people with nearly a dozen lists, including the ever-present “someday” list, who, after going through and trying to prioritize their tasks, feel completely stressed out. It’s no wonder – there’s too many things to do, spread among too many different places. If having multiple lists stresses you out or leaves you feeling overwhelmed, try whittling your lists down to just a few, and see if that feels more manageable for you.

List management becomes a task unto itself. This is the biggest danger I see with the multiple-list approach to to-do management, as you may end up spending a fair amount of time managing your lists and your tasks rather than actually completing them. Unless you are a project manager, you should focus on making headway on your tasks rather than shuffling and reshuffling your lists. In my experience, there’s a sort of organizing nirvana that happens when people feel their lists are “just right” – after spending a fair chunk of time organizing and reorganizing the lists, of course. And while feeling like you’re on top of the organization of your tasks is great, I think it’s even better if you actually make headway on or even complete a task or tasks instead of just organizing them. Don’t be fooled – while having the “perfect list” can be satisfying, you’ll be even more satisfied by making progress on your tasks. Organizing a list is NOT the same as actually getting something done!

Now, don’t get me wrong – lists, when used well, can be useful tools for collecting and organizing your thoughts, your priorities, and your tasks. Just be careful that your lists are working well for you, and that you’re not spending lots of your time managing them. Instead, your lists should be supportive tools that you spend just enough time on to help you move closer to completing the right tasks.

If you’re wondering how to best manage your to-do’s, we’d be happy to chat with you. Contact us for a complimentary strategy session.

2 Responses to “The Trouble with To-Do Lists”